The Fifth Day of Christmas 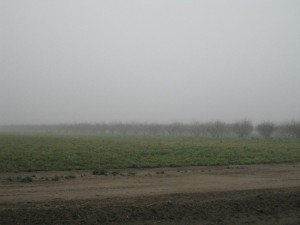 Some call me crazy (my mom), but I really miss the Central Valley fog from time to time.  So when the day broke dark and damp I was elated.  No, really! 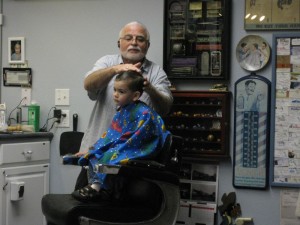 That evening, we did our Ripon outing.  First up was haircuts for all 4 guys.  Philip was so anxious to get to “Barbie’s” (he was a little mixed up with “Gary’s” and “The Barber’s”) that he threw a royal fit about taking a nap.  “It takes too long!!!” he wailed.  So when they pulled up to the shop and Gary met them in the street, Philip declared himself first up.

Following the shearings, we hit La Consuela’s for real Mexican grub.  I’d give my right eye for some more of their chips and salsa right about now . . . 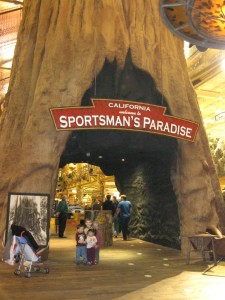 Bass Pro!!!! (that’s Mama Syd and the kids in front of “General Sherman”- or at least a replica of the real deal.  This is the entrance to the place.)  It’s like Cabela’s on steroids.  Needless to say, the guys were in heaven.

There were so many animals to see and weapons to touch. 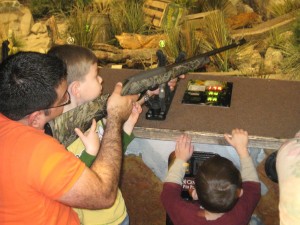 And a shooting gallery with lights and sounds and moving parts.  Everyone got a try and it was decided that that was the best part of the night.

Afterwards we purchased some candy and then attempted to find our way home in the then stifling fog.  THAT part – the being unable to see and it being unsafe – I don’t miss so much.