On the road again

Yesterday morning we set off for our Christmas break in CA.

First, we had to get dressed.  this took awhile because the kids kept running and jumping around yelling “We’re going to California!!!”  All were very excited as is evident above.

Then, we had to pack the car.  This photo only shows 75% of the load.  It took 3 days to get together as I had much “help.”  And poor Jac had to brave the -16 degree morning to haul the collection and pack it into the van.  Literally pack it in. I have been trying to convince myself that we have so many things because we’ll be gone so long and we have so many assorted activities to attend (wedding, Eagle Scout ceremony, Masses, etc.), but really I should have been more careful with the packing.  Do I need two pair of black heels?  Probably not, but I hate feeling like the country mouse in the big city.

Then there was the driving, driving, driving.  Thanks be to God that the roads were clear and easy to manage all the way to Salt Lake.  The kiddos were patient, too, keeping busy with a few books, singing and drawing.  Jac and I stayed occupied with the audiobook 1776 – a fabulous read, by the way.

We got into Salt Lake City and to our hotel by 9:30.  There was bouncing on the giant beds and baths in a whirlpool tub (it made Philip cry) and reading of The Lion the Witch and the Wardrobe before all 3 kids (and me) fell asleep in one bed, piled up like puppies. 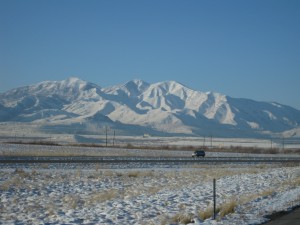 This morning everyone woke much rested and in good spirits.  This was the day we’d be in California!!!  This glorious view met us as we sped away in the direction of Nevada and almost immediately began the queries of “How much longer?” 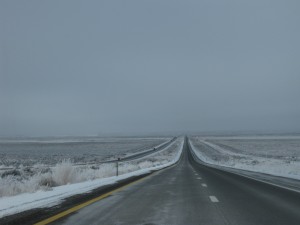 Again, the roads were clear and all was beautidul.  We ran into this winter wonderland outside of Wendover.  A freezing fog had set in and had frosted everything with a sugar coated look.  It inspired Jac to bust out the Christmas tunes which led to Tess yelling at the top of her lungs “IN A ONE HORSE OPEN SLEIGH!!!” and “REJOICE! REJOICE!” alternately for the better part of 20 minutes.  In the fog we missed our lunch stop and ended up at a divey gas station that didn’t have the needed bread but did have expensive gas (double what we had paid so far!) and an odd assortment of characters (the cashier was missing A LOT of her teeth.).

We finally made it to Reno and then into CALIFORNIA!!!!  There was much rejoicing in the car and we all marveled at the beauty of the Sierras.  I thanked the Lord for sending us such great weather – Donner Pass is dicey when all is well! – and for the ability to smell the mountains.  It smelled like home.

We dropped down into Sacramento in the middle of rush hour which was more than the kids could take.  They were thirsty, hungry, needed to puke (so said Max) and wanted the right kind of music.  When I announced that Mama Syd and Papa Chris had pizza waiting for us, all hell broke loose in the car with everyone but myself screaming for a long while and me laughing uncontrollably.

When we finally pulled up to 4642 Davis St., Tess burst into tears at the thought of having arrived – it was too good to be true.  And while they were starving, they were more excited to see their favorite spots, find the good toys and just plain check things out to eat.  The Wyeth’s came and it seemed like to Max, all was well.  He had not napped all day, but having seen all the things and people he wanted to see, he crawled into Chelsey’s lap and got comfortable.

Currently everyone is sleeping, thankful to be off the road at last.