Want to know what the house is looking like this advent?  You know you do-oo!!

The nativity and our homemade angels.  The kids take great delight and freedom in moving about the (sparse) set of characters.  Notice the missing baby Jesus – it is ADVENT after all.  This induces a sort of anxiety in the kiddos and –I believe – adds to the heightened sense of waiting.  Or, it could be messing them up for life – either way. 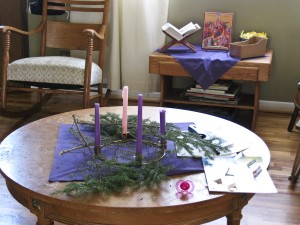 The advent “wreath” (yet to be put together by moi. Too lazy.)  with night prayer and the vocatioons office advent prayer (shout out to the “vocations office people”!)  Oh, and the lighter down where tiny hands can reach it.  Safety first around here, folks!  Also our cardboard manger and bowl of straw -it’s rather sparse at the moment . . . not a lot of charitable behavior going around.  And the uber confusing “Nativity of Christ” icon.  Is that Jesus?  Or John the Baptist getting a bath?  Why are they both shown as adults?  Weird. 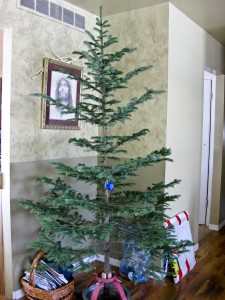 Our “perfect” tree.  Looks good, doesn’t it?  Few ornaments – we put up the Jesse tree ornaments and keep things sparse for Advent. 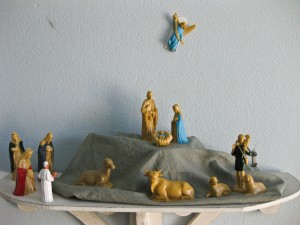 The bathroom nativity.  What?  You don’t have a nativy in your potty?  You should.  My favorite parts are the eschewed angel (Philip’s handiwork) and 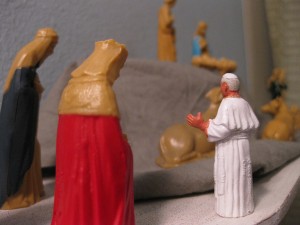 the addition of the Servant of God, John Paul II.  Max added him super stealth like sometime.  And also swithed the position of the cow “because it was not looking at Jesus.”  We’ve left John Paul there – he makes a nice addition, I think.  Max was a little nervous until I told him that John Paul was very happy in heaven to have his statue there and that right there, in adoration of the Christ Child before His mother and St. Joseph was where he would want to be/is.  Then all was well.  I guess that is charitable behavior after all.  Where’s the straw?