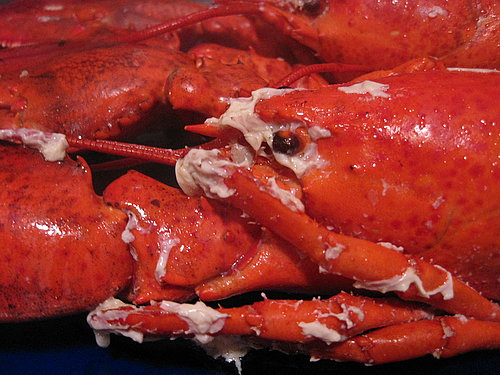 Check out these beauties! 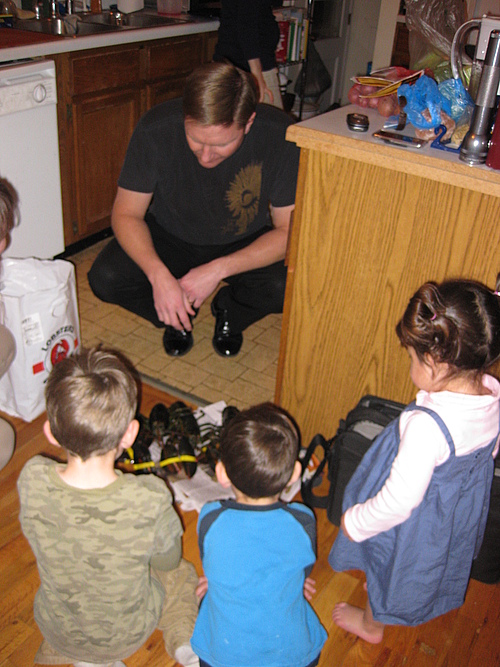 Everyone (well … can I generalize like that?  I will anyway) has taditions with their friends.  For some it’s a white elephant gift exchange.  Others it’s Beer Friday (my parents and cronies).  We have lobster.

And not just any friends.  But Susan and Fr. Christensen, the MOST sought after company in West River Catholic circles (I’m not making that up).

Anywho, somehow, after  some whining and pouting we were invited into the traditional Susan Birthday Lobster Fest a few years back.  Somehow we’ve retained the invite.  We’ve even hosted the shindig a couple of times.

Let me say that there is nothing like some red wine, lobster and good company.

Fr. is the cook and grills the lobster (I know I’m throwing around the word a lot.  I would say “crustacean” or “shell fish,” but I’m not really sure what they are.  Pardon me.).  Tonight he steamed broccoli and broiled potatoes and rosemary.  This after a 10 hour drive back from MN and a Seminary run.  Thank you, padre!

And thank you Susan for the Lobster.

The kids were very excited for the lobster – they did not partake, however.  They had mac’n’cheese and then were sent downstairs to watch Veggie Tales.  But they witnessed the preparations (killing and gutting the sea beasts).  Our little sous chef, Philip didn’t really care about the things crawling around on the floor, but brought out the stool so he could watch Fr. prepare them for the grill and then announced he was going to put them on the fire.  He really is all about the food.

– Lobster guts (maybe all animal guts?  I don’t know … ) are a pretty green-blue.  Who knew? Some of them were washed down my sink.  Yummy.

– Susan and I both managed to awkwardly shoot lobster bits around the room.  Part of my claw flew into Jac.  This would have been embarrassing if we weren’t in the company of friends.

– Good discussion and 2+ hours spent at the table.  Thank you Fr. and Susan for enduring our uncomfortable seating.  We really should have a couch upstairs …

– I did not feel pukey even once.  Thanks be to God!