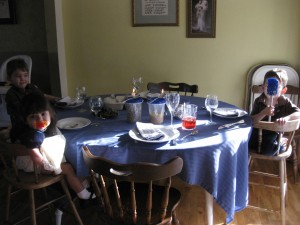 We were thankful for a low key and mellow day.

Thank you Tess for being sick so we could stay home.

Thank goodness Tess felt better than the day before.  When I asked her if she was ready to get dressed up pretty, she rasped, “Yes.  I pincess dess.”  So princess dress it was.

Thank you Mary, my mother-in-law, for making the Thanksgiving feast and packing it up for us in tupperware. (See the nicely set table above with the plastic containers.  I wanted to put the food into “real” dishes, but everyone was too hungry to wait.)

I was thankful for a husband who braved the grocery store on Thursday morning to get the items we thought we had in the pantry. (He said you would not believe the sort of characters that frequent the store on Thanksgiving morning.  Is he excepted from that group?)

We were thankful to watch some of the Macy’s Thanksgiving Day parade (“There was lots of dancing!!” the boys have been saying.  Apparently they liked that part . . . ).  And even more thankful that when we had had our fill at an hour and a half and asked the kiddos to turn it off, they happily obliged.

We gave thanks that the kids ate something from the feast.  Tess: crescent roll and corn.  Max: olives, jell-o salad and “doubled’ eggs (just the whites). Philip: corn and licked the spatula from the jell-o salad (see photo above).

Philip was thankful when the “doubled eggs” were done being prepared.  He kept hollering from down the hall, “Are the doubled eggs done yet?!  I can still smell them!!!!!”  He was not a fan.

Max and I were especially thankful for delicious sparkling cider and the story of the year Uncle Billy and I were served wine instead and Uncle Billy spit it out all over the table.  Good times.

I was grateful that my beloved handled the madness of  a webcam conversation with Mama Syd, Papa Chris, the Wyeths, Uncle Billy and Aunt Lindsay in Texas.  The webcam makes me super stressed.

Philip gave thanks for me making gingerbread dough (and I was thankful he stopped begging me to make a gingerbread house).

We are all thankful for the many blessings God has given us this year – and that includes you.