Did you say pumpkin? 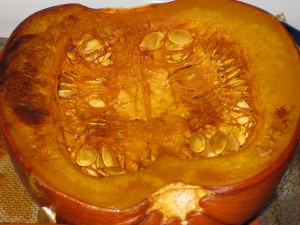 You can call me “Martha” if you’d llike.  This year I roasted pumpkins to make my own pumpkin puree.  The only thing to make it cooler would be if I had sown the heirloom seeds in my own garden that was fertilized by my organic kitchen compost.

Alas, the pumpkins were giveaways from one of the co-op moms who had too much produce.  She was insistent that these pumpkins were not for jack ‘o’ lanterns but for pies.  I have had them rolling around my living room since early October trying to come to terms with them.  You see, I like to make pies.  Really, really enjoy it.  I don’t really like to eat pie.  Sure, a berry pie will get me every time.  Sometimes I can be wooed by a nice apple confection.  But most of the time I let others partake.  And while I was a huge fan of pumpkin pie as a kid, that ship has sailed for me and I am no longer impressed.  Was it going to be worth the work of preparing the pumpkins for something I was not altogether fond of?  I remained undecided until Monday.

Monday the kids and I started learning about the Pilgrims.  We read about them and did math with them in mind.  Then Max asked to learn about the “real food” that they ate.  Enter the pumpkin.

On Tuesday we rounded up the trio of gourds and found instructions for roasting online.  Easy enough – split, place face down on pan, bake for one hour at 350 degrees.  Except that one of them was made of steel.  Jac had to be summoned from his office to assist with the breaking open.  In the end, he used a Samurai-style chop and flung pumpkin all over the on-lookers.

Twenty minutes into the roasting, the house started to smell like pumpkin.  At thirty minutes I got tired of it. By the time I took them out, I wanted to puke/throw them in my non-exsistent compost heap.  Yuck.  They taunted me from the stove or the rest of the afternoon.

Late in the evening, I finally got up the stomach and nerve to start the pureeing process.  I am proud to say I got 1 and 1/2 batches done.  Then I let my man servant take over. 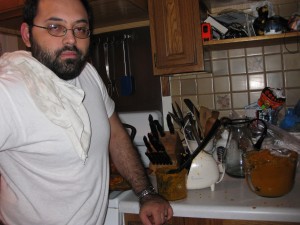 My man servant at work

Jac was much better at it than I was and didn’t mind the smell.  I even saw him taste testing his work.

In the end, we ended up with more than 8 cups of pumpkin puree.  Awesome.  How many pies did I make for Thanksgiving?  Zero.  That’s right, not a one.  Awesom-er.  Now I have 8 cups of what I consider to be out dated pumpkin in my freezer.  We’re almost into Advent . . . is it passe to still be making pumpkin treats?  I have recipes for muffins and tarts and fancy pies, but is it too late?  Honestly, if I never see a pumpkin again I’d be happy.