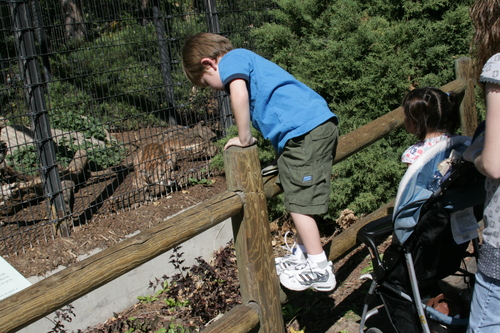 Safety, shmafety! The kids with the mountain lion. Philip is to the right of the stroller - follow the gaze of the cat.

On Tuesday, Jac had the day free so the whole clan headed to the zoo.  Wild times!!  As we arrived, a firetruck and ambulance was pulling in, completely unraveling Max.  Thankfully he and Philip both had to use the facilities and were otherwise occupied when a little girl was carried out to the ambulance.  (Jac reported that she did not look well and that her face was badly scratched up.  Did she faint and fall?  Or was she attacked by a bald eagle -it’s enclosure was taped off with yellow caution tape?  We’ll never know.)

First stop was the lions and other African wildlife.  Then to the tiger and seals.  The seals were making a rucus and fighting one another, so why not eat there?  Great choice.  It was after some food, though, that the kiddos perked up and seemed to notice the animals.  And the animals took notice of them.

Philip caught the eye of the mountain lion.  He was laying with his nose pressed up against the fence and was being a cat when we walked up.  But he locked eyes with Philip and his ears perked up and his nose started smelling – we could see his nostrils flaring.  Meanwhile, Philip decides to ‘do a dance’ for the cat.  He was singing and dancing and snapping.  The lion followed every move until I ushered the little snack away – then he closed his eyes and dropped his head.

After some birds and holding live meal worms – yum! – we checked out the monkeys.  Turns out Tess is the monkey whisperer. (I knew she had a talent, just wasn’t sure what … )  Each enclosure we visited, the onkeys were doing their usual deal – scratching butts, eating poo, etc. (There were lots of “information” signs professing our closeness in relation to the primates.  Jac watched one particularly ugly little one being gross and said “I am so not related to that!!”)  That is until Tess was lifted up to see.  Then, the beasts would go “ape” and come to the glass to check her out.  Maybe it was her pigtails or size, we’re not sure.  But it was incredible.  This giant orangutan came right to the glass, nose to nose with her, and then turned, rubbing his shoulder along the long length of the viewing window.  Totally crazy.

Anywho, all in all, it was a success.  We were tired and hot by the end of it all, but the kids talked about the animals for a long time after.