A Mouse in the House 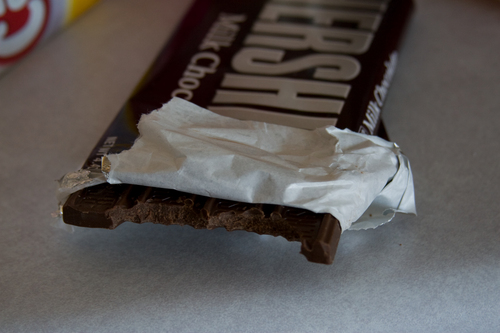 Evidence of the mouse

We have a mouse in the house.  I found evidence this morning when I came to the kitchen to make breakfast.  There on the counter was the remainder of the chocolate bar that was used last night to make curls for the top of the White Russian cupcakes we made for a party. (recipe here!) And in the bar was one perfect bite.  I quickly decided the mouse was nonoe other than Philip – he’s tall enough to reach the counter and can smell chocolate a mile away.

As I prepared to make supper this afternoon I noticed a second bite out of the bar (sillly me for leaving it on the counter!).  When he awoke from his nap I asked him if he was the one who had eaten the chocolate.  He batted those chocolate eyes and wrinkled his nose in a mischevious smile.  “Yes.”  “Shneaky, shneaky!” I said.  “When did you take the second bite?”  “Because you told me I couldn’t have the Doritos and I wanted some.”  Sneaky, indeed.